I have ended up contributing to Grubby Gardeners through the power of Twitter and my connection to gardening via my mum who is head gardener at Waterperry Gardens. She was asked to participate in an obstacle race – which is not her kind of activity at all, and for want of a better phase, she ‘dug me out’ and nominated me in her place!

Lacking in excuses I had to sign myself up and I haven’t looked back since.

I’m truly honoured to have been welcomed into such a lovely, kind and generous group of people and have taken part, and pushed my own personal boundaries and accomplished things I never thought I could, all whilst fund raising for Perennial, which is a fantastic charity!

So far I have the challenges I have completed are The Dirty Dozen, an exciting 12km Obstacle race, and the London to Brighton Cycle on a 7 seater bike, which was 56 miles of cycling on the most ridiculous contraption you have ever seen! To date I have raised £606.00 and I’m looking forward to the next challenge that comes my way!

The Dirty Dozen Obstacle Race was probably one of the hardest things I have ever done. Whilst I enjoy keeping fit, distance running is not my kind of thing. Although to most, 12km may not seem that far, I have never once attempted to run that far, and even half of that distance usually had me giving up and resigning myself to a slow walk!

Pair this with swimming though rivers, trudging through bogs, carrying tyres and logs, climbing walls and all kinds of outrageous obstacles and you have a recipe for… disaster! I started out with the mindset that I would attempt to just avoid the mud which was a notion quickly laughed off by the team members who had completed the race before, and I soon realised as we entered a wooded area knee-deep in boggy mud that staying clean and dry was simply not an option.

The race was a real test of endurance, both physically and mentally. There were plenty of times I really felt like quitting and was wishing I had put in a lot more effort in the gym! However the team were incredible and there was always someone giving a leg up or helpful push over a wall or mud mountain, or dragging you from a river. This is a testimony to the Grubby Gardeners and Perennial who are always helping people and putting others first!

I was so proud to have completed the race and by the finish line I was genuinely enjoying myself and knew that if another Grubby Gardeners challenge came my way I would struggle to say no! 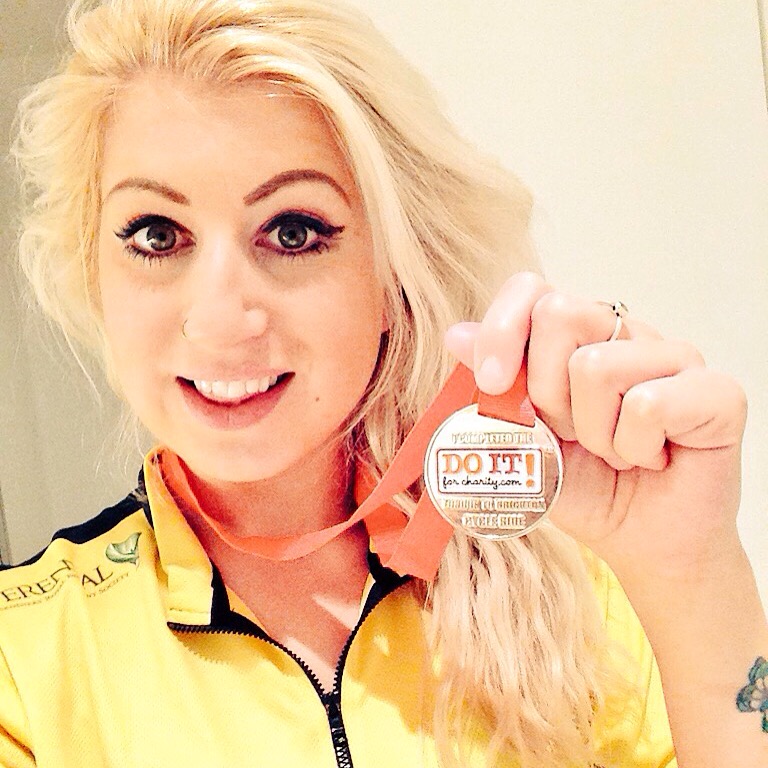 The London to Brighton bike ride seemed like it might be a walk in the park in comparison to running and obstacles.. cycling is easy right!? That was until I came to realise that this challenge involved a 7 seater bike and then, on the day of the race, discovering the bike only had one fixed gear!

This was truly an outrageous idea. The owners of the bike weren’t convinced we would make it, and as the bike was offloaded from the trailer at 6am on Clapham Common it began to attract a lot of attention.

At the beginning of the race it seemed like a bit of fun, we were all having a laugh, particularly at Andy who was a little worse for wear from the previous night! However as soon at we started to leave London and the hills came upon us, the combined weight of us all and the bike, and the lack of gears became no laughing matter.

Luckily, the team was made up of very strong-willed individuals and none of us wanted to give up, even when the bike was creaking up hills that other single cyclists were pushing their bikes up. We were determined to stay on the bike and complete the race in the allocated time.

We caused traffic jams and road rage, people were laughing and taking photos, it certainly caused a big reaction which is great publicity for Perennial. The hard work and endurance was very much worth it when we hurtled downhill at 36mph into Brighton and passers by and people in their cars were waving and cheering, even the police gave us a wave!

Almost 10 hours after we began the ride, we approached Brighton seafront, the bike was so wide we almost couldn’t get it through the bollards and we took up the entire width of the cycle lane. The seafront was packed with people as it was a sunny Sunday afternoon and as we approached the finish line other cyclists exclaimed “it’s them! They made it!”
We had made it! Almost 10 hours later, one 15 minute lunch break, uphill, down hill, through city, town and villages. 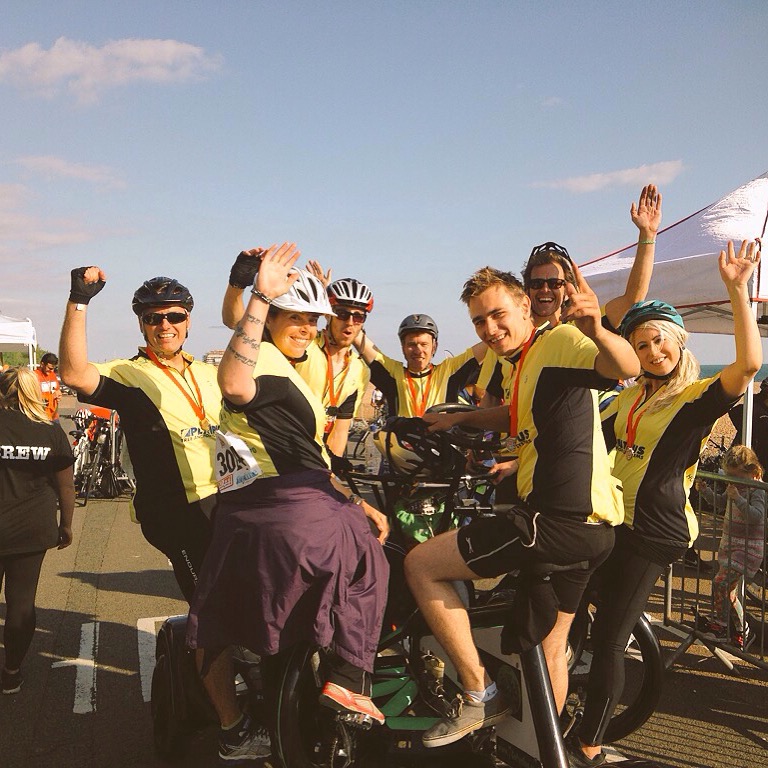 Personally I struggled to walk the next couple of days, it hurt to sit, it hurt to stand, but would I do it again? Definitely!