So, Michael Perry, Head Honcho, Lord of the Grubby Gardeners, has asked if I would be able to write about my adventures with the GG’s this year..

Having changed career in June 2014, I am so lucky to find myself where I am in the horticultural industry. From knowing nobody, I now know quite a few people in the hort world, from gardeners, to designers, to suppliers and charity workers.

I can hand on heart say, had it not been for the Grubby’s this would not have happened.
My first step into Grubby land was being convinced by the lovely Andrew Wain that doing the Dirty Dozen 12km in April would be a good idea. In many respects he was right, in many others he was wrong.

The race itself was hell and I was in no way fit enough to have attempted it, but I did. But I also met Michael, Ben William Pope, David Lewis, Gareth Kinsella, Darren Jacques, Tommy, Rachel Havers and others whose names fail me now, and so began new friendships. Little was I to know that this hellish day was the beginning of a year of accomplishments and setting records. 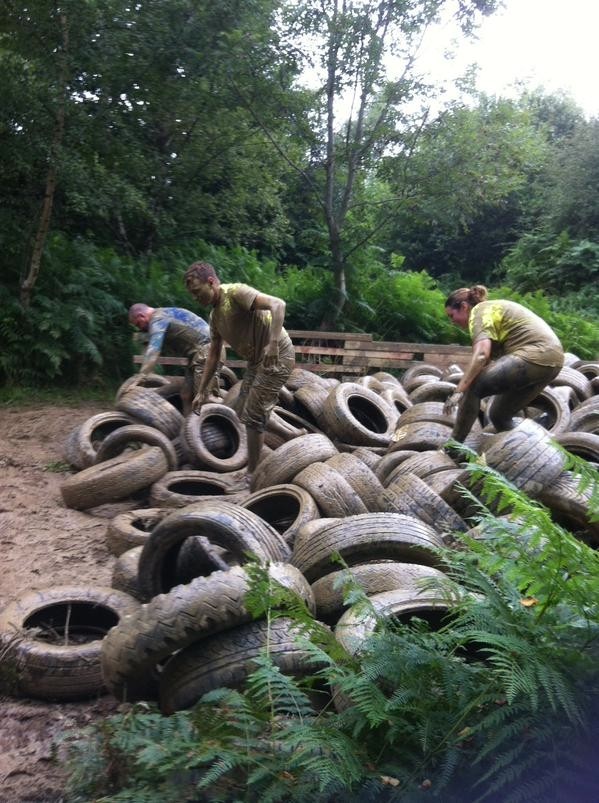 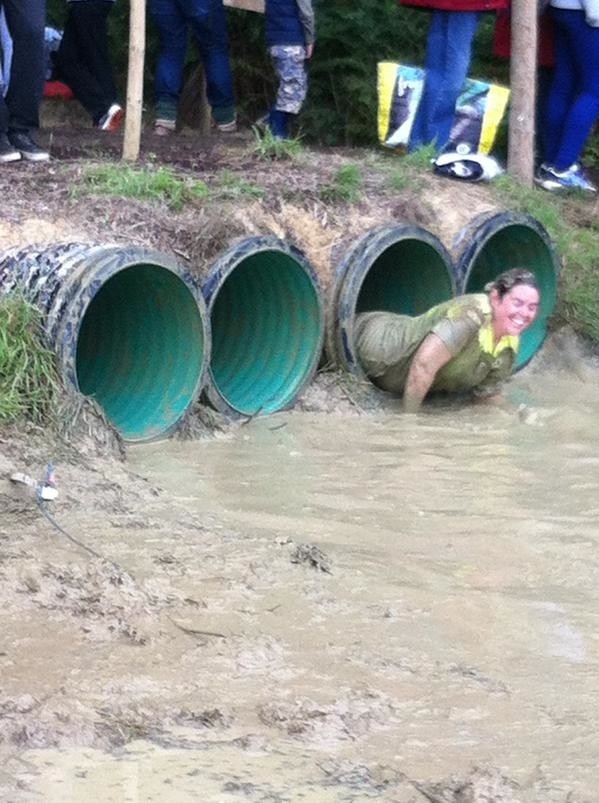 After the bruising at the end of the day, I figured my Grubby career was over. However after a couple of weeks I heard about the Nuts Challenge; smaller distance and more accessible obstacles. I figured I’d apply for this as I needed a goal, as well as raising monies for Perennial. Then I put it to the back of my head (well, September seemed a long way away!)

Over the next few months, I did further volunteering with Perennial, the main beneficiary of the Grubby Gardeners, and got to hear about other events people were taking part in to raise money; jumping out of airplanes (not for me thanks) and 10km runs (my knees were still killing from the Dirty Dozen). Then, at a function at the Garden Museum, I got talking to another Grubby, Jamie Butterworth, and after a few glasses of vino, the beginnings of a crazy plan had been cooked up…

With the support of Perennial in organising things, the Grubby Gardeners set out on a weekend of the most audacious challenge yet (in my humble opinion)…

On Saturday 6th September, Jamie Butterworth and myself entered and completed the Nuts Challenge Mud Run. We laughed all the way round. Every obstacle was fun, the mud was never ending, the swim across a lake fully clothed towards the end was welcome. We decided that everyone should and could do this (well, if I can, anyone can!). 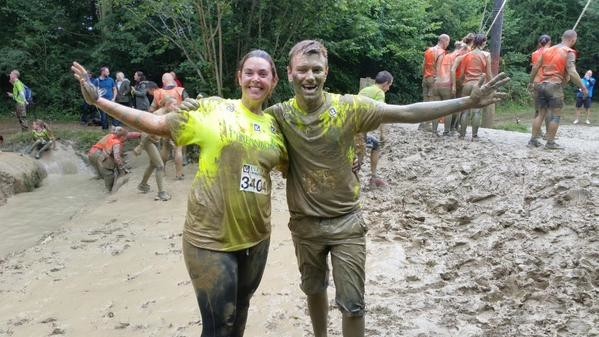 Then comes the biggie; THE VERY NEXY DAY, 7th September 2015, Jamie, myself and 5 other slightly crazy Grubby’s set out at 6.45am from Clapham Common on a 7 seater conference bike (COBI). Andy Wain, David Lewis, Rachel Havers, Darren Cavedaschi and Alex Jones travelled from all over the country to take part in this bike ride. It was tough, the hills were long and painful, the bike would go no faster than 5.5mph on the flat, but we hit 36mph going downhill.

The owners of the bike did not expect the bike (or us!) to make it more than 20 miles, so when they got the call to say we were at Ditchling Beacon, the excitement rose, the support team arrived and an hour later we were cruising along Madeira Drive, towards the finish line, and soon indulging in beer and cake. The road was lined with other cyclists and supporters clapping and cheering us on. I can honestly say it was one of the most amazing experiences I have had. 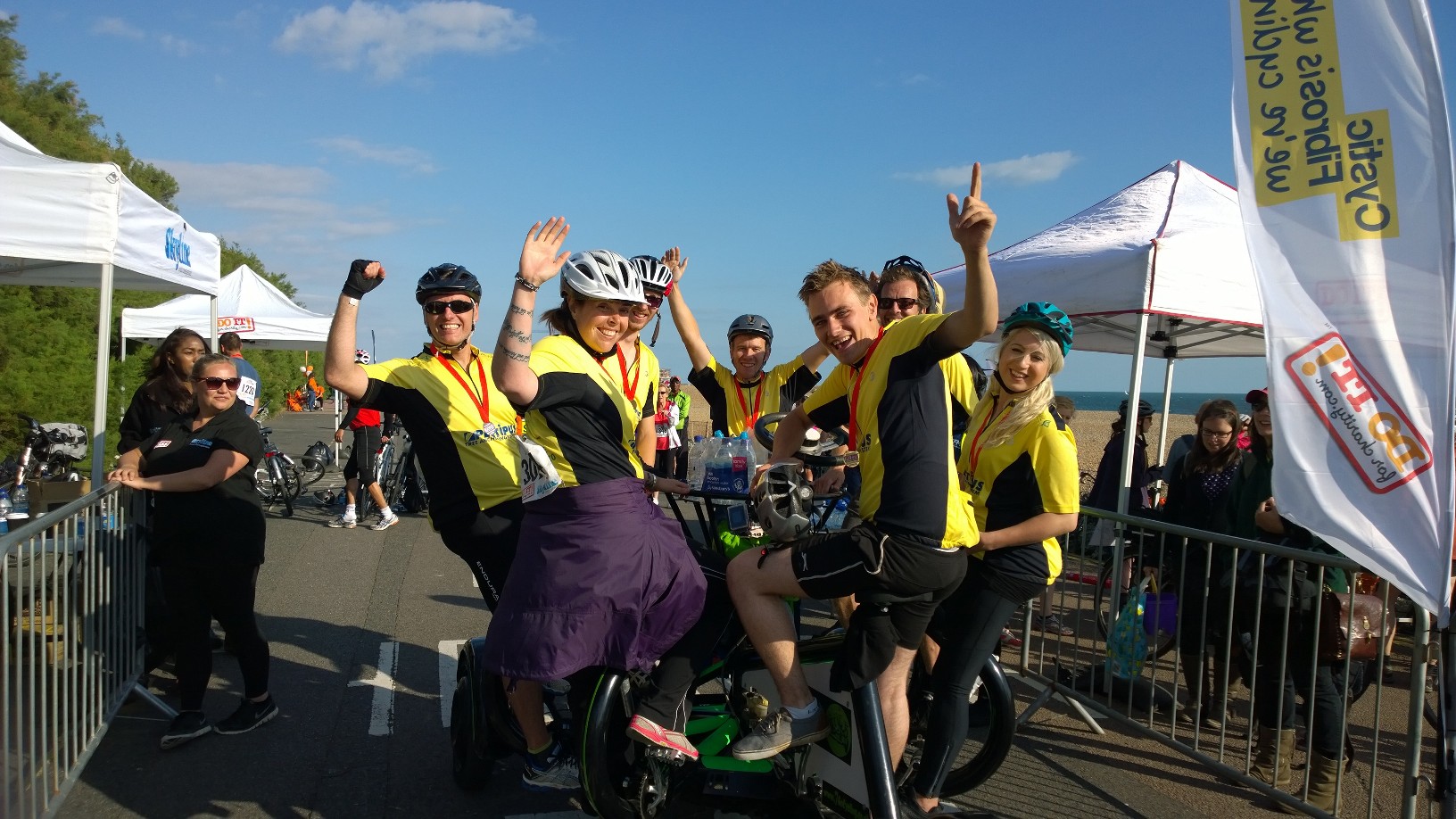 So apart from raising money for Perennial, being a Grubby Gardener has also enabled me to meet new people, network, expand my horizons and challenge myself.

If you have an idea for fundraising for Perennial, let them know or contact Michael Perry via FB or Twitter. There is always something in the pipeline!

Meet people, challenge yourself, have fun….JOIN THE GRUBBY GARDENERS!!